Difference between revisions of "Power System"

From Elcano Project Wiki
Jump to navigation Jump to search

The Elcano power supply is a 36V battery on the Catrike recumbents or a 48V supply on the ELF. The picture shows three 12V lead-acid batteries connected in series to provide 36V. The fourth box in the top of the picture is a plastic case that houses a circuit board and two DC-DC converters. The converters output a 12V supply and a 24V supply. All power lines are color-coded with the right color wire when possible and with the right color Anderson connectors. The power lines are:

The steering servo runs on 12V.

Brakes are held on with 12V.

All Arduinos have a Vin pin that can take 12V. The Arduino internally converts the voltage to 5V and 3.3V.

The four-wire CAN connection consists of CAN hi, CAN lo, Ground, and 12V. This connection powers the Raspberry Pi, Receiver board and Scanse Sweep board.

Used to apply the brakes.

This is the power line to the brake solenoids. It is initially 24V to apply the brake, then reduced to 12V to hold the brake on.

Main power goes to the E-Bike controller, which converts DC power to three phase AC to drive the electric motor. The circuit board inside the box (shown in the picture below) with the DC-DC converters does some conditioning on the main power before sending it on to the E-Bike controller. The signal conditioning board has been called the PowerOn board. It initially had three functions:

1. Provide a power-on circuit that the Kelly e-bike controllers need. It has a large resistor between the 36V input line and 36V output line. When the switch is thrown, a relay bypasses the resistor.

2. Signal conditioning on phase signals from electric motor to give a fine resolution of vehicle speed.

The PowerOn board presently in use implements only the first function. The board is cut and jumpered so that the DPST switch also turns the 12V and 24V lines on/off. The fuse is bypassed by a bolt. The fuse was originally 2 Amps, and intended for the signal portion of the 36V line that drives the e-bike controller. (The main 36V line goes the the electric motor and is fused for 25A). The 12V line is fused for 10A and the 24V line for 5A. Since both of these lines now go through the fuse on the board, that fuse is too small and is redundant. 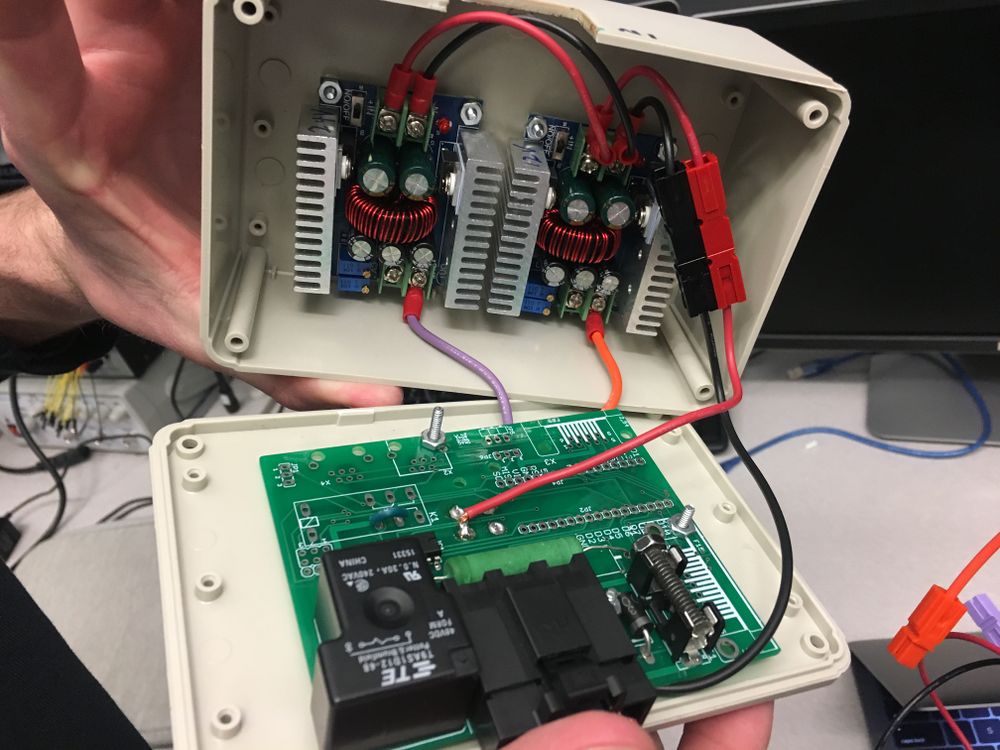